A Worthwhile Project and a Generous Gift:
FAER speaks to Coauthor of Avoiding Common Anesthesia Errors 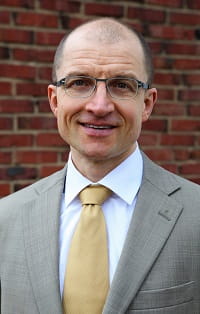 Section Chief of neuroanesthesia at the University of Pittsburgh Medical Center, Dr. Gierl is also involved in perioperative medicine, ERAS in neuroanesthesia and teaching medical students and residents about each of those things. Dr. Gierl’s work in educating these early career physicians reflects the origin of his involvement with the second edition of Avoiding Common Anesthesia Errors.

“As a resident, I coauthored a chapter in the original [Avoiding Common Anesthesia Errors] with one of the very experienced attending anesthesiologists at the University of Pittsburgh,” said Dr. Gierl. “I took the time to read most of that book - during lunches and between cases - and I found that it really helped me to 'see the forest through the trees.’ To continue that analogy, it also helped me to avoid setting a few brush fires. Mind you I didn't have a smart phone when I was a resident, so I had the time to read about anesthesia.”

Given the first edition of Avoiding Common Anesthesia Errors’ usefulness to Dr. Gierl during his residency, his involvement in writing the second edition makes all the more sense. The experience that led Dr. Gierl to this project in the first place in turn leads into his goal in coauthoring the updated edition.

“One of my mentors recommended that I never publish anything that I wouldn’t want to read. The first edition was translated into six different languages, so not only did I want to read it, but a lot of other people wanted to read it as well. Over the decade since the first edition our practice of anesthesia has evolved sufficiently to justify removing some chapters. For example, they don't even make products like THAM solution anymore. And when the first [Avoiding Common Anesthesia Errors] was published in 2009, the new United States' Medicare bundled payment plans known as MACRA and MIPS hadn't even been invented yet.”

The updated Avoiding Common Anesthesia Errors certainly seems worthy of its audience’s interest. Considering what Dr. Gierl himself gained in reading the book during his residency, it promises worthwhile guidance to first-time readers. The second edition will also provide new information to those already familiar with the first edition, information garnered from a knowledgeable, expansive network of sources.

“The opportunity to work with this multitalented group of editors was great. I was fairly late to the table in getting to know Cathy Marcucci and Jeff Kirsch. They assembled a great team. A tremendous amount of knowledge was shared not just between anesthesiologists but between incredibly experienced institutions from Oregon Health Sciences to the Mayo Clinic, Michigan, Cleveland and Hopkins - I could go on and on, but really the book shares what has worked for leading institutions. Non-US contributors included the University Hospital of Zurich, Switzerland. Oh, and I'd be amiss not to plug for my colleagues at my home institution, the University of Pittsburgh”

Dr. Gierl’s enthusiasm, for both the work involved in this book as well as those contributing to it, is a testament to his dedication to anesthesiology and this project.

Regarding the content of Avoiding Common Anesthesia Errors itself, the book tells readers what to expect from their cases, how complications present and how to treat them. This guide goes on to detail how one can identify early problems and how early decisions impact later outcomes. Such a practical approach to the information presented in Avoiding Common Anesthesia Errors makes it all the more useful.

“I know to expect a malpractice case because [Avoiding Common Anesthesia Errors] has ten chapters in a legal section that was edited by Cobin Soelberg, J.D., M.D., who is both a lawyer and anesthesiologist. That section helps to identify the practitioner's likelihood of being sued and what to do in the event of an untoward outcome in order to avoid lengthy lawsuits or at least to minimize the repercussions.”

On behalf of FAER, I would like to again express our deepest gratitude to Drs. Gierl, Kirsch and Marcucci for choosing to donate the proceeds from Avoiding Common Anesthesia Errors to FAER. We as a foundation strive to provide the absolute best support to physician-scientists in anesthesiology and support like this is what makes our efforts possible.

If you are interested in Avoiding Common Anesthesia Errors or viewing other books whose authors chose to donate their proceeds to FAER, stop by our page on Purchase Support.