Because patients aren’t sedated, they’re completely clear headed when they’re done. They can have a cup of tea in the recovery area.

“We weren’t the first to do it. A group in Glasgow beat us to it,” Griffiths says. His first patient to try this approach was an elderly woman about to undergo emergency hip fracture surgery. “She chose to watch Dirty Dancing,” Griffiths says. Still, the tactic was so new that the BBC got wind and ran a story on it, interviewing Griffiths from the O.R. Now, Peterborough Hospital offers most patients of all ages the choice of regional anesthesia/movie or general anesthesia for elective and emergency surgery.

“General anesthesia is still a very safe option. I explain that to the patient,” Griffiths says. “The advantages of regional anesthesia are not immense.” Still, “it’s always best to avoid any mood-altering medication because of the risk of acute delirium and cognitive dysfunction down the line,” Griffiths says. Although Griffiths does get people who say, ‘Just put me to sleep,’ the movie option is popular. 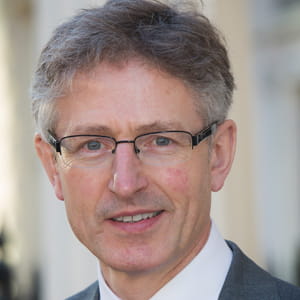 Griffiths would prefer to offer patients Netflix on an iPad so they could watch whatever they wanted, including cricket or football. But the hospital’s Wi-Fi isn’t powerful enough to stream movies.

Instead, surgical patients at Peterborough Hospital watch a movie on a DVD player, which a hospital technician attached to a clamp on a drip stand. “He made me a platform for the DVD,” Griffiths says. The DVD stand is on the other side of the surgical tent, which visually blocks patients from surgery. Patients watch a movie while wearing noise-cancelation headphones. “Some don’t even realize the surgery has gone on,” Griffiths says. He recalls one patient who was so engrossed in her movie choice—the musical South Pacific—she started singing loudly during surgery and didn’t realize it. “She was quite amused when we told her about it later,” Griffiths says.

Generally, Griffiths has noticed that older female patients tend to prefer American films such as 50 Shades of Grey and musicals such as West Side Story. “The guys often choose David Attenborough documentaries, such as The Life of Mammals,” he says. “Attenborough is a naturalist. There’s something about his voice that makes people quite reassured, the calming way he presents things, which adds to the whole process,” Griffiths says. Because patients aren’t sedated, they’re completely clear headed when they’re done. “They can have a cup of tea in the recovery area,” he says. 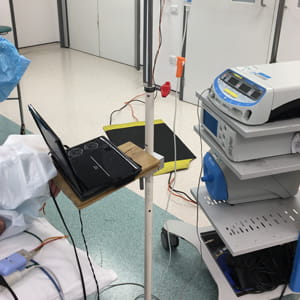 When Griffiths first proposed offering patients the regional anesthesia/DVD option, the surgical team and the hospital’s leadership supported the idea. “They saw it as something to offer patients that’s just a different way of approaching the problem,” he says. And, from an economic standpoint, it makes sense. “There’s evidence that patients with hip and knee arthroplasty stay in in the hospital less time if they have a regional technique with no sedation. There may be an economic advantage if patients may go home earlier.”

Tune in to these tips

Overall, the movie option is a hit. “Anecdotally, there’s less delirium,” Griffiths says. “I think it’s because patients are engaged. The DVD takes their minds off what’s happening. It’s a pleasant memory of the surgery.”

ASA and the PBHI does not endorse specific hospital procedures, policies or programs outlined in this content. All research and clinical material published in this article (above) by ASA and the PBHI is for informational purposes only. Readers are encouraged to confirm the information contained herein with other sources and consider applications within the context of their local environment. Patients and consumers should review the information carefully with their professional health care provider. The information is not intended to replace medical advice offered by physicians. ASA and PBHI will not be liable for any direct, indirect, consequential, special, exemplary, or other damages arising therefrom.