The Power of A - ASA and ASAE: ‘Stronger by Association’

ASA is made stronger by the wide variety of relationships it maintains across the broader health care ecosystem. ASA partners with ASAE – The Center for Association Leadership – in a number of ways, most notably in staff leadership training programs and representation at the highest levels of ASAE’s governance structure.

ASA has been recognized by ASAE through its “Power of A” award three times:

The award is one of the highest honors in the association industry, recognizing recipients as innovators impacting society at the local, national and global levels.

The four key themes in Power of A messaging are: 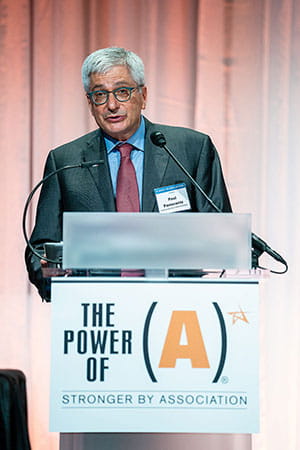 ASA CEO Paul Pomerantz served as Chair of the Power of A Oversight Committee in 2014-15, and has represented ASA within ASAE since 2011.

ASA CEO Paul Pomerantz talks about how the Power of A has embraced the “human element” and succeeded in broadcasting effective stories to lawmakers and the public.