ASA Members Advocate in Their Communities

Throughout the 60-day comment period, ASA members have found innovative and thoughtful ways to engage their colleagues and community on the Safe VA Care initiative. These efforts have resulted in a majority of the 86,000 comments submitted to the Federal Register supportive of maintaining physician-led anesthesia care in the Department of Veterans Affairs (VA). 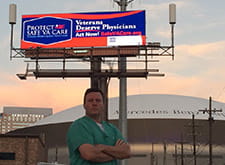 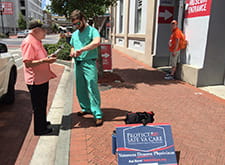 The LSA has also created a billboard displaying the Safe VA Care initiative to commuters and visitors. 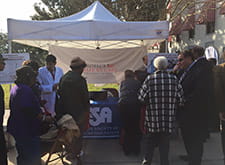 ASA members across the country have been undertaking similar advocacy efforts. In Florida, members of the Florida Society of Anesthesiologists (FSA) staffed a tent as part of the Anesthesiology Day at the state capitol, collecting comments from supporters of safe, physician-led anesthesia care for Veterans. 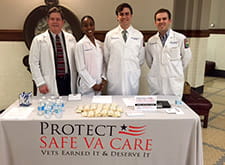 Residents in Mississippi distributed Safe VA Care initiative materials and baked goods at the state capitol in Jackson to legislators and their staff.

In Massachusetts, ASA member Mary Ann Vann, M.D., collected paper comment forms from dozens of Veterans to be submitted to the Federal Register.

ASA members have also been vocal advocates for the Safe VA Care initiative in the press. In Iowa, Joseph Cassady, M.D., and Scott Paulsen, M.D., were featured on WHO-AM radio. The Missouri Society of Anesthesiologists created a radio ad highlighting the negative impact the proposed policy would have on Veterans. 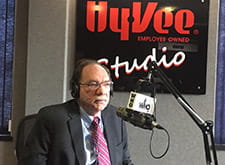 Additionally, more than 45 individual members have submitted letters to the editor and op-eds which have been published across the country.

Thank you to everyone involved in these and other community outreach methods during the comment period.  If you or a colleague has an example of advocacy on the Safe VA Care initiative, please email grassroots@asahq.org.

During the final days of the comment period, all ASA members are encouraged to employ similar tactics and utilize resources available to generate further outreach in their communities.