On Tuesday, February 13, members of ASA leadership visited Capitol Hill in Washington, D.C. to receive updates from prominent staff in Congress on the agenda and outlook for the rest of 2018.

Throughout the day-long meetings, members of the ASA Executive Committee heard from staff members from various Committees of Jurisdiction about the latest legislation, ongoing efforts on health care reform, and priorities for the upcoming months, while also providing the legislative staff insight into ASA’s legislative priorities and a first-hand look at how legislation impacts patient safety and the delivery of care.

The “Day in Washington” event is held early each year with ASA’s leadership. 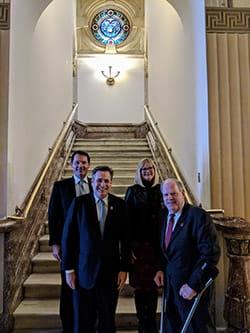