You may experience a brief disruption in service on Sunday, February 5, between the hours of 3 a.m. and 10 a.m. (CT) due to scheduled website maintenance.
Skip to main content

A 74-year-old man is undergoing a right radical nephrectomy for renal carcinoma. He plans to continue his active lifestyle after recovery but is concerned about postoperative delirium and cognitive impairment. According to a recent study assessing use of angiotensin-converting enzyme inhibitors or angiotensin receptor blockers to reduce postoperative delirium, which of the following is MOST likely to reduce the rate of delirium in surgical intensive care patients?

(A) Use of either drug preoperatively X

(B) Use of either drug postoperatively during intensive care ✔

Read the discussion below.

Gain insight on this topic, and many others, with Summaries of Emerging Evidence (SEE) 2022 – now available. The content is aggregated from 30 international medical journals to streamline your learning and improve your practice.

Following major surgery, delirium is a major and common complication, particularly in the elderly. Although poorly understood, neurotransmitter imbalance and inflammation are believed to be contributing factors. Furthermore, delirium is associated with increases in surgical morbidity and mortality as well as cognitive impairment. There are no well-accepted anesthetic techniques to reduce its occurrence, although some evidence for the use of dexmedetomidine and Bispectral Index monitoring exists. It is well known that angiotensin receptor blockers and angiotensin-converting enzyme inhibitors are neuroprotective and have utility in many brain disorders. These drugs appear to protect cerebral blood flow, maintain blood–brain barrier function, and reduce excessive brain inflammation and neuronal injury in stroke and numerous other brain conditions. Epidemiological studies suggest these drugs also slow progression of Alzheimer disease, while clinical studies suggest mitigation of cognitive loss attributable to stroke or aging. For example, use of losartan in the elderly markedly improves cognitive function compared to atenolol. Additionally, recent research into the classic renin angiotensin system has demonstrated angiotensin II has neurotoxic effects, whereas alternative renin angiotensin systems may offer cerebral protection.

In a recent single-center cohort study of 4,864 patients admitted to critical care units after noncardiac surgery, delirium developed in 39% (551 of 1,396) of patients given angiotensin-converting enzyme inhibitors or angiotensin receptor blockers preoperatively and 39% (1,344 of 3,468) of patients who were not given these drugs. The authors suggested that this was likely due to the short-acting nature of the drugs. On the other hand, there was a significantly lower rate of delirium in patients administered angiotensin-converting enzyme inhibitors or angiotensin receptor blockers postoperatively (prior to delirium or intensive care unit discharge) compared with patients who did not receive either drug (23% vs 41%) (Figure 1). Furthermore, these control patients had a much earlier onset of delirium (19 hours vs 64 hours). 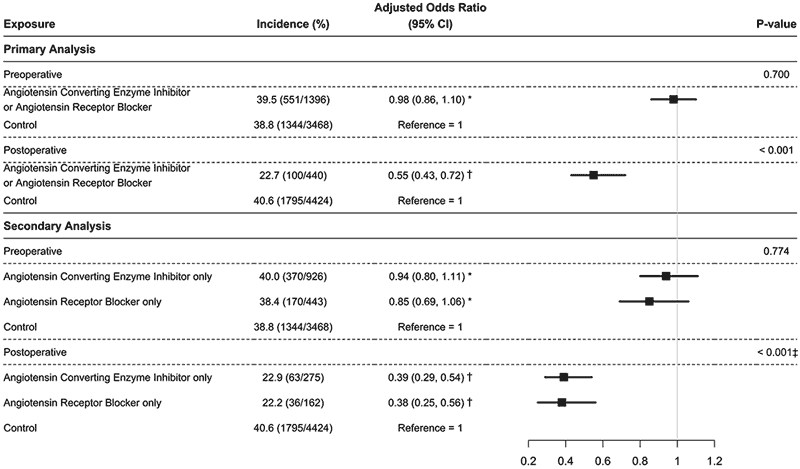 Although further studies are needed, initiation of these medications in the surgical intensive care unit would seem to offer potential benefits in reducing the occurrence of postoperative delirium.